Believe it or not, there is no snow on my front lawn. For now. It’s a beautiful 60 degrees today, cloudy, but nice. Tomorrow, on the other hand, 36 with snow/sleet/rain. Bluh.

Just thought I’d let you know what’s up ’round here.

My oldest daughter, Celia, turned 16. Her sisters made a fabulous cake for her. It was yellow and chocolate cake with a chocolate/nutella icing. It was yummy. They used sugar sheets to make the dots, stripes, bow tie and tardis. Celia’s a Dr. Who fan. I don’t understand it all, but her sisters knew just what to make. Not bad for an 11 & a 12 year old.

The high school’s winter formal just happened to be on Celia’s birthday. What a fun way to spend your special day. Hubs and I chaperoned. We’ve never done that before. It was fun. They’re all good kids so we didn’t have to break anything up. We just chatted and played cards with the dean of students. See the scaffolding in the background, that’s the set for the play and they’re still working on the taller panels. Not the most romantic or charming addition to the dance, but no one seemed to mind. 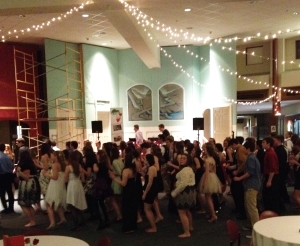 I alter costumes for my girls’ ballet that happens at the end of May. The costumes have started rolling in and they’re are so lovely to look at. I probably should start touching them too. Better to get ahead than swamped later. 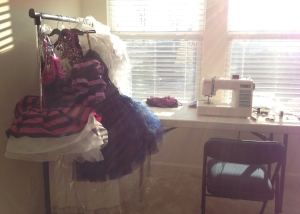 I’m participating in my first-ever quilt-along. It’s hosted by Amanda Castor at Material Girl Quilts. She just released week 3 on Friday. So, really, it’s not too late to jump in. I’m super excited about it.

Most recently, I’ve written a new pattern. It’s being tested RIGHT NOW! Yay! I’m hoping to have it published and live by Friday, March 21st.

I’m also participating in a blog tour that’s going on this month. I’ll let you know more about that in a day or two. That about wraps it up. Have a good ole day.

A weekend away with the hubs is the right medicine!
Ok 😊
Woot! I’ll keep you posted!
Free patterns!?! Blog got a makeover yesterday, including more free patterns added and a long overdue blog post. 😳 Link in the bio!
If I promise to start a sewing school someday, can I have 5 or 6 of these? They’re so pretty and they’re on sale!
Sometimes you just need a cozy place for your earbuds. This is part of the Easy Wallet pattern in the shop. Link in profile! The fabric is from @bellablvdllc fabric line called snapshots. .